If only 4 Corners was edgy enough to cover this important work, because as Fairfax’s Michael Pascoe said, this research should be triggering a royal commission.

How to get your land rezoned: A QLD story

My previous research looked at favouritism in land rezoning via the Urban Land Development Authority (ULDA) in Queensland. By looking at the characteristics of landowners inside and outside the boundaries of the rezoned areas I was able to show that that main determinant of getting rezoned is not you land size, or location, or any other planning considerations, but how well connected the landowner is in network of connected elites in Queensland.

So it is interesting to see one of those landowners who missed out (partly) on the favouritism of the ULDA seeking favours from the Logan City Council using exactly the type of textbook methods of influence I uncovered in my previous research.

The project is called Flinders, and it is situated outside the southern boundary of the Greater Flagstone ULDA area (which after a change of government is called a Priority Development Area). When I came across materials for this development proposal I thought it quite unusual; it’s not in a priority area, there are plenty of identical “new town centre” developments planned within a 10km radius, and there seems to be quite a lot of marketing fluff online considering the thing isn’t even approved and probably shouldn’t be according to existing planning controls.

For someone who has spent four years investigating dodgy planning approvals in this area it was a case that seemed quite interesting.

In the image below, from the documents submitted for planning approval, you can see the priority development area (GFPDA) hashed on the right of the blue line. The land owned by Pacific Holding Pty Ltd (applying for the development approval) is in yellow, and they are seeking to approve a massive new township on this whole area (which is currently agricultural). If you want to look up all the details go to the Logan Planning and Development Enquiries page (here), and search for application MCUI – 38 / 2015. It applies to Lots 1, 2, 3, 19, 32, 42, 79, 80, 390 and number 194 Mount Elliot Road, Undullah. 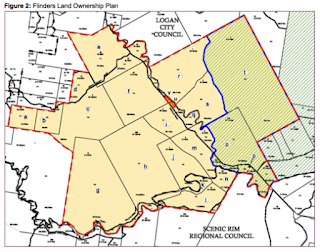 The proponents state in their application that they missed out in being fully within Greater Flagstone Priority Development Area (GFPDA), and are arguing that they should be treated in a similar manner in terms of planning outcomes. They say

The subject part of the Flinders development will provide a logical extension to the GFPDA and will be a key landholding contributing to land supply to accommodate forecast growth in the region. Ultimately it is anticipated that the population of Flinders will be in the order of 50,000 people (32,000 of those will reside on the subject site) with 15,000 permanent jobs created in a range of occupations.

Note the ambit claims of future population. Sure, maybe at some point this century there will be 50,000 people there. But not in the next couple of decades. It’s also lovely to see claims of how well-connected the site is. I drove through there recently. Trust me. It’s not well connected.

In any case there are some more interesting parts of the application which show a textbook effort in gaining political favour, after having missed out on the last round of favours at the ULDA.

Darwin and Michelle King are the children of Philip Cea, a fruit grower who was embroiled in the citrus canker outbreak in 2005, and was claimed to have bypassed quarantine to import fruit trees and vines in 2001. Aside from the fruit business, he has also has built relationships with government, and was part of a 2013 trade mission to China along with a number of other high profile property industry people, including professional lobbyists (some being former politicians), many land developers, and real estate agents.

I found this video of the King’s hosting a one-day development forum about Cities of the Future, which provides a picture of the next generation’s own efforts to build relationships. Invited were various State agencies and local government representatives, planning consultants and property industry organisations. It’s quite interesting to see their investment in relationship-building documented this way.

It’s almost as if the development cannot be justified through regular planning routes based on its own merit.

Some of the names of consultants employed or appearing in the video include, Mike Day from RobertsDay planning consultants, Gavin Johnson and John Harrison from Mortons Urban Solutions. Daniel Parker and Alexander O’Reilly from MacroPlan for the “needs assessment”. Stephen Harrison from iLiv group, who is also Vice President of the industry lobby group the Urban Development Institute of Australia (Qld), is the project director for the Flinders development.

I’m not accusing any of these people of doing anything other than what they are employed to do. But hiring the “right” consultants has always been part of relationship-building, something the King’s have been undertaking with vigour in order to secure their planning approval. Does anyone really think they would have the same chance of success if they only hired consultants who had never dealt with the local council or State government before?

The cover fire of urgent demand

The “Housing and Non-Residential Needs Assessment” submitted as part of their application is quite something. It asserts that when there are 50,000 people living there, than there will be demand for many services and facilities. I’m stunned. But I don’t see anything about where the 50,000 number comes from.

They also try to hitch a ride on the back of the neighbouring Priority Development Area again, this time by stating how much their development will “amplify” all the gains. It’s a real magic pudding story devoid of any realism.

But we know this is all nonsense. Another Priority Development Area, Yarrabilba, which is a very similar urban fringe development, has a 30 year timeframe for their build out to 45,000 residents. With both of these substitute developments competing for buyers and new residents, I expect that it will take half a century or more to get close to building what is proposed.

So why the urgency? What exactly is the pressing need? Is this just cover fire – a distraction for the public and an legitimate-looking excuse for the council to approve what might otherwise be a nonsense application?

On page 44 of their application they commit to

Develop an Innovation Precinct in partnership with Massachusetts Institute of Technology (MIT) and CSIRO.

They also reiterate this on their “Housing and Non-Residential Needs Assessment”, stating

Flinders was a core partner (along with CSIRO) in a submission to the Australian Government earlier this year seeking to establish an Industry Innovation Precinct focused on urban development. Its goal was to provide the opportunity to integrate innovation into existing urban development practices that could create an exemplar sustainable community and be replicated nationwide. It is not apparent whether this program will continue under the LNP, however Pacific International Group has secured Massachusetts Institute of Technology (MIT) and Bond University as innovation partners to build on the work done to date. This may also include a tertiary education facility.

They go on to explain the value of having an MIT facility in the area. That would be quite something. My guess is that they are talking up “inviting someone from MIT to a conference” as some kind of commitment to a remote campus. Again, if the demand for this development exists there, why the need to name drop so outrageously?

It is common to use trusts and other structures to hide what is going on. Flinders is no exception. Here it’s the Pacific International Development Corporation (PIDC) Trust making the application. The land is owned by Flinders Land Holding Pty Ltd.

As it typical in Australia, knowing exactly who owns what land is often quite tricky. After years of being unable to truly enforce our own tax laws, the Australian Tax Office has now requested from each state 32 years of land ownership records. It remains truly bizarre that land titles corporate records are not freely available online. Knowing who is who is a business for insiders only.

What I didn’t find is also notable. I didn’t find any records of the Kings, or their various businesses, donating to State politics in the last few years. This is one of the findings I made when studying rezoning in other ULDA areas. Political donations weren’t as useful at gaining favours as being well-connected to insiders.

If my research has merit, and if the King’s continue to build their relationships with property insiders, than I have no doubt they will be granted extremely valuable rezoning gifts soon enough. If only they had been working their relationships this much back in 2005-2008 they might have had their whole property declared inside the Greater Flagstone ULDA (now GFPDA) the first time.