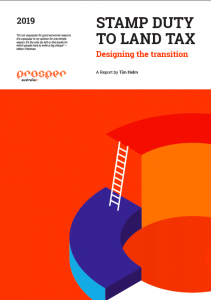 Stamp duty is an unfair tax. People who have to move because they can’t afford their mortgage anymore or because they are going through a divorce, are taxed heavily during what is likely to be a difficult time in their life. Meanwhile, people with stable enough livelihoods to hold their property for 50 years have only pay tax once, 50 years ago.

Broad-based land tax is not only fairer but it is more efficient. It’ll be cheaper to downsize or move closer to work, resulting in more efficient use of housing stock and perhaps even less traffic congestion.

Land tax is also a more sustainable revenue source for Governments. Victoria just lost around one billion in stamp duty revenue over the last year due to the recent property market downturn. That is less to spend on the schools, hospitals and transport we all need. Land tax provides a stable revenue alternative.

WHAT DOES THIS NEW REPORT ADD?

Most policy experts agree the reform makes sense, but think it’s too politically difficult to achieve. This project challenges that notion and puts forward a clear roadmap for change.

For politicians searching for a circuit-breaker on state tax reform, this model offers generous but logical concessions for existing owners, choice for future buyers, and an attractive introductory period to secure support early on. It is complex at the policy design back-end but simple at the taxpayer front-end.